You are the focus with us

Let my team serve you today 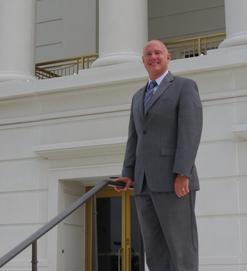 Jeff was being raised by his father, when at 9, his father was in a construction accident that included injuries that took his life.  Jeff was adopted by his grandparents and was loved very deeply by them.  His grandparents were very "country", only had  sixth-grade educations, his grandmother didn't drive and they had no air-conditioning in the small house they lived in....but they were very hard workers, made due with the meager amount of money available and loved Jeff very much. His grandmother purchased most of his clothes at yard sales. Looking back now, his life was hard but with the love and values that his grandparents shared he grew into a nice young man.

Made some interesting choices...

Jeff's grandfather was a big man who worked as a construction foreman.  Jeff learned the process of the hard workweek with rewarding payday on Fridays.  In high school, the value of education was not evident to him, but that weekly paycheck seemed the way to go.  So at sixteen, Jeff quit school and worked with a company building docks.  This was hard work and not being the strapping big man that his grandfather was, Jeff soon learned that there had to be something else he could do.

....And there was born, Jeff the law enforcement officer.

After taking his GED and going to the Police Academy in Pensacola, Jeff became an Okaloosa County Deputy at 19.  In those times, he was not old enough to buy his own bullets and had to get those from the Sheriff.  Jeff remained a deputy for 6 years and then became Mary Esther's first Police Chief.  Jeff made great friends and built valuable relationships with law enforcement "buddies" that continue to this day.  During this time, he went to college at night and received his Bachelor's degree in Criminal Justice.  He loved his work in law enforcement and wanted to continue in that vein but was itching to do more.

Jeff left his job as police chief to attend law school at Nova Southeastern in Ft Lauderdale.  This was definitely a culture shock

in the criminal and family law arenas and continues to challenge himself to learn more and apply his knowledge and experience everyday.

Jeff loves his family and friends, and his time with them is very precious.  He enjoys traveling and is always up for new challenges.  When he looks back over his life to this point, he knows that all of the people in his life and the experiences he has

had are what make him who he is today.